What is Abdominal X-Ray or KUB? 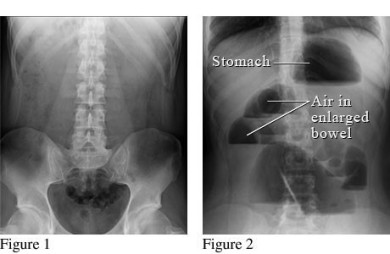 Abdominal X-Ray or KUBWhy do I need to register or sign in for WebMD to save?

We will provide you with a dropdown of all your saved articles when you are registered and signed in.

An abdominal X-ray is a picture of structures and organs in the belly (abdomen). This includes the stomach, liver, spleen, large and small intestines, and the diaphragm, which is the muscle that separates the chest and belly areas. Often two X-rays will be taken from different positions. If the test is being done to look for certain problems of the kidneys or bladder, it is often called a KUB (for kidneys, ureters, and bladder).

X-rays are a form of radiation, like light or radio waves, that are focused into a beam, much like a flashlight beam. X-rays can pass through most objects including the human body. When X-rays strike a piece of photographic film, they make a picture. Dense tissues in the body, such as bones, block (absorb) many of the X-rays and look white on an X-ray picture. Less dense tissues, such as muscles and organs, block fewer of the X-rays (more of the X-rays pass through) and look like shades of gray on an X-ray. X-rays that pass mostly through air, such as through the lungs, look black on the picture.

An abdominal X-ray may be one of the first tests done to find a cause of belly pain, swelling, nausea, or vomiting. And other tests (such as ultrasound, CT scan, or intravenous pyelography) may be used to look for more specific problems. 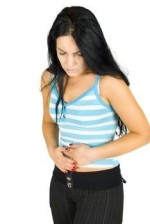 Why It Is Done

An abdominal X-ray is done to:

Before the X-ray test, tell your doctor if you:

You may be asked to empty your bladder before the test. You may need to take off any jewelry that may be in the way of the X-ray picture, such as if you have a pierced belly button.

Talk to your doctor about any concerns you have regarding the need for the test, its risks, how it will be done, or what the results will mean. 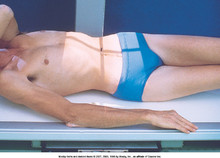 How It Is Done

You may need to take off all or most of your clothes. You will be given a gown to use during the test.

You will lie on your back on a table. A lead apron may be placed over your lower pelvic area to protect it from the X-ray. A woman's ovaries cannot be protected during this test because they lie too close to the belly organs that are X-rayed. A man's testicles can sometimes be protected during the test.

After the X-ray machine is positioned over your belly, you will be asked to hold your breath while the X-ray pictures are taken. You need to lie very still so the pictures are clear.

Many times, two pictures are taken: one while you are lying down (supine) and the other one while you are standing (erect view). The erect view can help find a blockage of the intestine or a hole (perforation) in the stomach or an intestine that is leaking air. If you are not able to stand, the X-ray may be taken while you lie on your side with your arm over your head.

An abdominal X-ray takes about 5 to 10 minutes. You will be asked to wait about 5 minutes while the X-rays are developed in case more pictures need to be taken.

There is always a slight chance of damage to cells or tissue from radiation, including the low levels of radiation used for this test. But the chance of damage from the X-rays is usually very low compared with the benefits of the test.

What Affects the Test

Reasons you may not be able to have the test or why the results may not be helpful include: 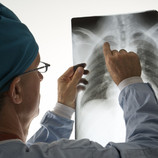 What to Expect After an Abdominal X-Ray (KUB)

You usually can go back to your normal routine right after the exam.

A radiologist will analyze, or "read," your x-ray images. This doctor is specially trained to supervise x-ray tests and look at the x-ray pictures.

The radiologist will send a report to your doctor (who requested the x-ray test). Your doctor will discuss the results with you.

In an emergency, you'll get the x-ray results right away. Otherwise, it may take 24 hours or more. Talk with your doctor about when you should expect the results.